Prior to her diagnosis, Gina was a district manager for a financial services company overseeing eight offices throughout her state. She enjoyed her independence and was proudly self-reliant. When Gina was not able to work due to her eye condition, she had no income, no health insurance coverage and, as a “single adult with no dependents,” did not qualify for assistance.

Thanks to cataract surgery she was able to regain some vision in her right eye. However, Gina still needed kenalog injections in her left eye every 4 to 6 weeks, which proved to be financially devastating as she was still unable to work. She was forced to become reliant on family members.

She had great difficulty driving and reading, could not lift regular household objects, like her vacuum cleaner, as her balance was off. In order to see information on a computer, she used a magnifying glass on a 22” or larger screen.   Gina was told her only hope was to raise the $10,000 needed for her surgery, or live the rest of her life on disability due to vision loss. Gina was devastated and scared. She had no way of ever raising that kind of money. 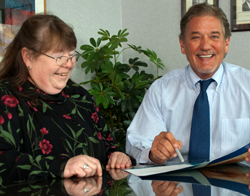 When Gina was selected as a Christmas Gift of Sight recipient, Gina was shaken, and responded hesitantly with a question, “Are you sure you called the right person?” When the answer was “yes,” Gina described her feelings. “This is a wonderful gift I will remember as long as I live.” She continued, “I have never felt so blessed or so happy. I called my Mom. I called my girlfriends,” she said. “We just cried.”

“I didn’t realize how valuable my sight was. I couldn’t read my dosage information on my medication bottles,” she said.   Neither could she tell if her clothes were the right color – or if they were inside-out. Cooking was difficult since she couldn’t read the label, so she had to guess at what was in the can. She struggled doing laundry, because the text on the washing machine’s dials was not raised, so she couldn’t read the dials.

“Just try wearing a blindfold for a couple of hours,” she added. “Your whole world changes. It becomes a very scary place.”